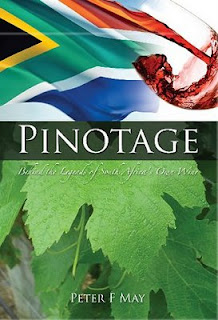 My book PINOTAGE: Behind the Legends of South Africa's Own Wine is now availabe as a Amazon Kindle eBook.

Click the icons below and you could be reading it in a minute.

Decanter magazine commissioned Christian Eedes some months ago to write an article on Pinotage. Eedes has never been a great proponent of the variety and during his time as deputy editor of South Africa’s WINE magazine it dropped its annual Pinotage Champion trophy in favour of Shiraz.

Back then Eedes wrote “more than a few examples of this wine [Shiraz] are recognised as unquestionably great, and this confirms the grape's inherent worth. Unfortunately, the same can still not be said for Pinotage. Shiraz, always generous in flavour, is a friendly wine, whereas Pinotage very often isn't. It would seem the writing is on the wall for Pinotage.”

Four years later in 2008 he wrote “WINE magazine is not anti-Pinotage. We do wonder how many producers are truly capable of greatness.”

What a difference a couple of years makes. In Decanter this month Eedes says “South Africa doesn’t have a single ‘icon’ wine. One that is recognised and sought after the world over. At last not yet. But could its first icon wine be a Pinotage?”

Pinotage as an icon? There are several South Africa wines that I consider icons, starting with Klein Constantia’s ‘Vin de Constance’ whose price has tripled since I first bought it.

I think an icon wine has to have a track record and Kanonkop Estate currently is the only Pinotage with iconic status in my eyes. Kaapzicht Estate’s Steytler Pinotage has also achieved great success at international competitions but I don’t think it is a name widely known. Pinotage winemaker’s are ramping up prices with special bottlings (Kanonkop’s Black Label, Beyerskloof’s Diesel, Hamilton Russell’s Ashbourne, Chateau Naude’s Vin de Francois) in an attempt to signify iconic status. All are excellent but they are wines that, I think have been more cellared than drunk.


Since 1997 The Pinotage Club has been working to raise the profile of the variety and no-one would be happier than me to see Pinotage becoming South Africa’s iconic wine* and when a former sceptic like Christian Eedes starts talking about Pinotage being it, that day is coming closer.


*Though a a drawback for people who actually enjoy drinking wine as opposed to speculating with it is that iconic prices take ones favourite wines out of the everyday drinking budget.
Peter F May at 14:55 2 comments:

Irit Boxer-Shank is the youngest winemaker in Israel and one of only five women employed in Barkan Winery’s cellar. Dale Robertson , who interviewed her for the Houston Chronicle says, “at the moment, she's most passionate about Pinotage, a grape she believes has a superb future in the Israeli terroir.”

New Zealand’s Wanguini Chronicle says Kidnapper Cliffs Hawke's Bay Pinotage 2009, is “produced by the talented team at Te Awa, who have a long pedigree when it comes to making great Pinotage, this is a gorgeous, buxom red showing layers of sweet black tea, baking spices, plum and pepper. It has a delicious, warm, earthy character in the mouth and sensational persistence of flavour.”

Anthony Rose in The Independent (UK) includes Diemersfontein’s Pinotage in a list of wines he dislikes, saying its “its oak-derived flavours of coffee and chocolate” are “an aberration,” but he noted its great popularity. The recent appearance of Marks & Spencer’s Coffee Pinotage Mochatage and Tesco’s mocha-flavoured Choccochino Shiraz which are “as distasteful as the Diemersfontein Pinotage I so dislike. But I have no doubt that to those who like the taste of chocolate in their wine, they will be extremely popular.”

He say that this “goes to show that however objective we try to be about taste, beauty in the long run is in the eye – and nose – of the beholder.”


However Koos Kombuis at South Africa’s Mail & Guardian has made Pinotage the focus of his diet. The columnist writes “during the last few weeks, after eating mostly fat-free food and heaps of vegetables, aided by lots of Beyerskloof Pinotage wine (which, according to the manufacturers, contains a substance that actually enlarges blood vessels), my cholestrol count has miraculously dropped from 7,5 to 6,4, and I’ve lost an astonishing two-and-a-half kilogrammes”.