My Wine of the Month for December is Topper's Mountain 2010 Wild Ferment Pinotage  from the  New England appellation of New South Wales, Australia.

I had a too brief taste of this wine in September at the international Pinotage tasting I presented in Toronto, but this time I was able to give it my full attention. I bought a bottle of 2009 and 2010 vintage which I had couriered to my Sydney hotel. Thanks to BYO enjoyed it with dinner in Annie’s Kitchen restaurant on Coogee Beach.

On first taste the 2010 is a lighter style of Pinotage with cherry notes but there’s a meaty herbal body with violet hints. There are soft tannins in the background and a touch of dark chocolate.

This wine grows on one as it develops in the glass and it has a persistent finish, leaving lingering cherry flavours. Really delicious complex wine.

The wine was fermented using only the wild vineyard years and traditionally fined with isinglass. Only 700 bottles were produced.

Topper's Mountain are cool-climate vineyards planted on red volcanic soils at a altitude of 900 metres. Mark Kirby is the owner and vigneron and the winemaker is Mike Hayes.


Ake Ake Vineyard Winery are in the midst of planting 400 Pinotage vines. “We had difficulty  sourcing them,” owner John Clarke told me, “and we received these pot-planted but that means we can plant them now even though it’s late in the season.”
John showed me the first of the infant vines. After just two weeks in the ground they are already showing healthy new growth. “The nursery say that we can get our first harvest in the second year, but I am dubious about that,” said John. “But come back in two years.”

Ake Ake— the name means ‘forever and ever’ in the Maori language— is near Keri Keri in The Bay of Islands Northland region of New Zealand’s North Island.

Ake Ake have been producing wine for a decade and already have a reputation for their Pinotage, which they made from grapes sourced from Waitapu Vineyard, the most westerly vineyard in the north of New Zealand’s North Island.

“Our soil is a bit of everything,” says John. “We are on higher ground and exposed to the wind so some varieties that do well at neighbouring vineyards fail here.”

Ake Ake grow organically and are in transition to full certification.  “From September 2015 our wine will be Certified Organic by Organic Farm NZ,” says John. “Growing grapes using organic principals will be better for our customers who visit the vineyard and restaurant, us who live here and ultimately we should have healthier vines and better wines.”

“We do have a bit of powdery mildew, but not enough to cause problems. Pinotage, with its thick skins and early ripening, should do well here. I really like the wine it makes, and it’s more reliable than Pinot Noir which can be hit and miss here in the North Island.”

“This is 100% Pinotage aged 10 months in seasoned oak barrels. Whole berry fermentation— the berries ware so hard most went through the destemmer-crusher barely marked, and unfined.”

This wine is delicious but probably would be even better with more time as it has the dark purple colour of youth in the glass. There’s cedarwood on the nose followed by an assault of layers of fruit including raspberry, cherry and red plum. Delicious ripe and fruity and before one can find more descriptors the glass and bottle are empty.

We hope to return in a few years to taste John’s own estate grown Pinotage. 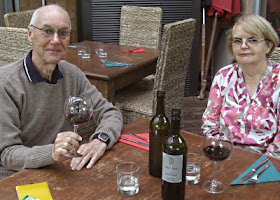 Before we left we dined like royalty in the winery restaurant. 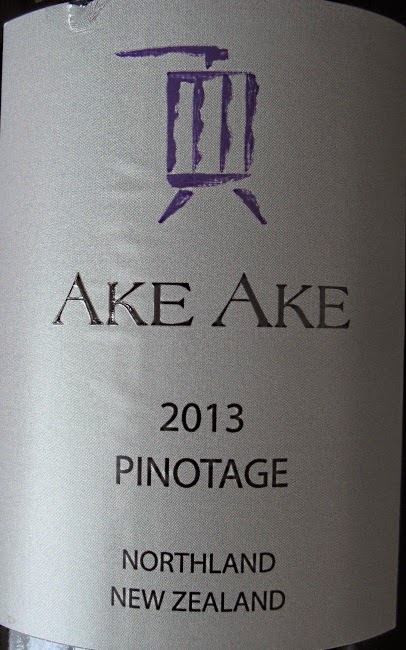 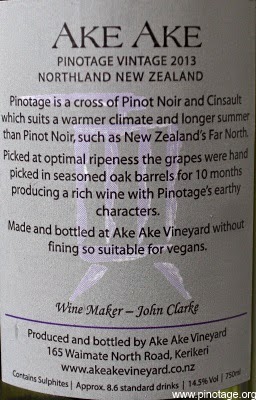 
Te Awa winery on the Gimblett Gravels in Hawke’s Bay, New Zealand, have been making excellent Pinotage since 1993 but no more. 2010 was their last Pinotage vintage.

The vineyards lining the driveway to the winery have a gap in them where seven rows of Pinotage vines used to be. They’ve been pulled up, but nothing has yet taken their place.

I bought one of the last bottles from just a handful of remaining 2010 premium Kidnapper’s Cliff label which comes in a statement heavy bottle, closed with a cork sealed with red wax and thick textured paper labels. 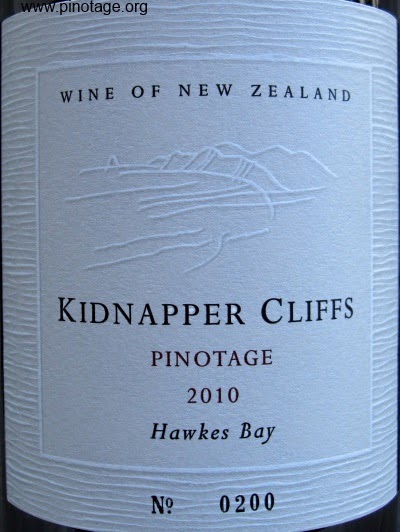 The wine is dense and powerful with a berry nose, medium bodied with soft tannins and hint of toffee and chocolate.

There are a reducing number of New Zealand Pinotages being produced and Te Awa  made one of the best. Pinotage sceptic Jamie Goode awarded the 2009 Kidnapper Cliffs Pinotage 91 points, the 2010 won Double Gold at the 5 Nations Challenge, Bob Campbell, MW, rated 2010 4/5 stars and there are many positive reviews on the web. 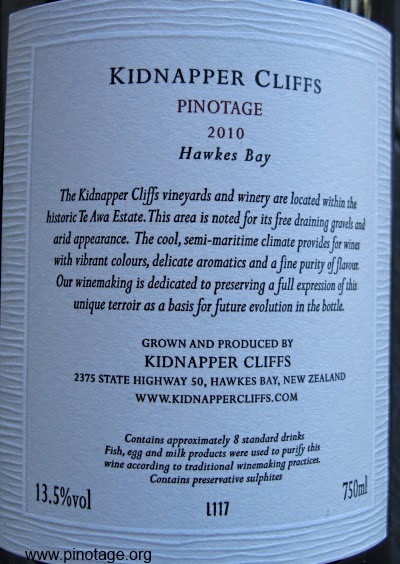