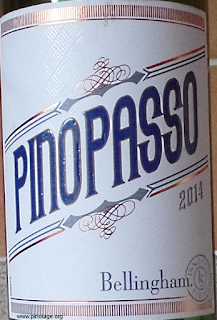 I’m no marketer but I don’t think the name or label does this wine justice: it makes a reference to ‘passo’ as in ‘ripasso’ and ‘appassimento’, but how many people understand what these terms mean?

There  is no explanation on the back label, or indeed on the Bellingham website, which incidentally says the wine is 100% Pinotage when the linked fact sheet says it includes 20% Shiraz.

Bellingham say ‘Pinopasso is made in the Repasso style, the wine after fermentation is ‘repassed’ [Italians say Appassimento] over the skins from which it was pressed, which still contain sugar. A fermentation then takes place which then adds much character to the wine, extra tannins and of course alcohol.’

The wine is a homage to Italian Prisoners of War who worked at Bellingham and after the war settled in the Cape and built Bellingham’s white wine cellar.

I hid the label and served it blind. ‘Smooth’, said one, ‘mature Bordeaux, or maybe Rioja’ said another.

I’ll be showing the 2015 vintage of this wine at the American Wine Society National Conference on 5 November. I think it’ll impress them as much as it did me. Update 5 November 2016: It was the 2014 vintage that was shipped to the AWS conference, and they did love it, scoring equal top marks with attendees who were stunned by the value and taste at a +/- $12 retail price. 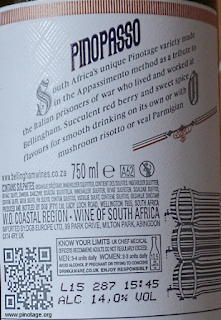 
Aaldering have an interesting range of four Pinotages including a white, pink and two reds, one unwooded.

Aaldering Vineyard and Wines is owned by Marianne and Fons Aaldering,  Dutch entrepreneurs, who in 2004 bought the Devon Valley property previously owned by Hidden Valley winery. The Pinotage vineyard was first planted in 1998 and Aalderings first Pinotage release was the 2007 vintage.

Aaldering   Pinotage Blanc 2016. This white wine comes from a vineyard planted in 1998. Whole bunches were pressed and the skins immediately removed. It hasn’t seen any oak and has an attractive nose with a fresh clean taste but a little lacking in the middle.

Aaldering   ‘Lady M’ Pinotage 2016. This unwooded Pinotage originally came about when  wine  maturing on its lees after undergoing malolactic fermentation and before going into wooden barrel was drawn from stainless steel tanks for an event in the cellars. The wine was such a hit with the guests, but especially Marianne  Aaldering, it was  decided to bottle some as it was and  name it Lady M in her honour. The idea is to make the wine in a   style to get the Pinotage freshness. It is cold soaked to get its purple colour.

And indeed this wine is attractive with fresh juicy flavours giving the feeling of popping a handful of vine dried Pinotage berries into ones mouth. Lovely.

Aaldering Pinotage 2013 which has just been released is their classic barrique aged original. It spent 26 months in 225 litre French oak barrels of which 30% were new. This is a delicious Pinotage, with sweet fruit to the front and red berries spiced with savoury flavours and soft oak tannins.

Unfortunately Aaldering wines don’t appear to be retailed in the UK but I understand they’re in several top restaurants and in KLM and other airlines business class.


‘the perfect wine with  takeout’. She says

To pair with the deep flavors of maheberawi (an Ethiopian mixed meat platter), slow-cooked barbecues, smokes and stews, wines from Man, Fairview and Robertson are great under-$12 Pinotage values. For finer cuts, Kanonkop is an established leader in racy and elegant red (about $40).


She also suggest Pinotage as a good choice with rotisserie chicken.