My Wine of the Month for October is Grangehurst Pinotage 2008. 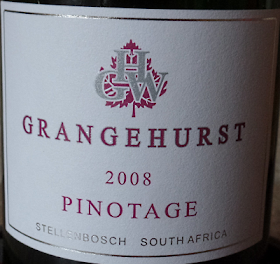 Jeremy Walker, owner/winemaker of Grangehurst doesn’t release his wines until they are ready. Thus this 2008 Pinotage, that I bought last month, is the most recent vintage and had just arrived in the UK from the Cape. When I tasted the 2007 at the London Wine Fair in June (see here) I wished I’d had it with food. Well, I enjoyed the 2008 with dinner.

Jeremy told me in 2007 “Our style of wine is meant very much for accompanying food and we sell mostly to restaurants. They like to have wines with some age.”

The 2008 is 88% Pinotage with 10% Cabernet Sauvignon and 2% Merlot. It’s Grangehurst tradition to blend in a little Cabernet, dating from Jeremy’s maiden Grangehurst vintage  in 1992 when he didn’t have enough Pinotage to fill a tank. It was so successful he’s done it ever since.

Pinotage was sourced from vineyards in Firgrove/Helderberg and Simonsberg. After destalking and crushing the grapes, the mash was fermented in open tanks for 5 and 7 days on the skins.

The cap of skins was punched down 4 to 6 times per day then basket pressed and blended with the free-run wine in stainless steel tanks before being transferred to small oak barrels. Malolactic fermentation occurred in tanks and barrels.

This wine was clarified by natural settling and racking, without fining agents, centrifuges or filters – a natural, unhurried method of clarifying wine.

Portions of the Pinotage wines from the two vineyards were blended and barrel matured, whilst another portion (Firgrove/Helderberg) was barrel matured as a single vineyard.

The wines spent an average of 22 months in 225 litre French (87%) and American (13%) oak barrels. The two Pinotage portions were racked and blended in a stainless steel tank together with a few barrels of Cabernet Sauvignon and a splash of Merlot.

Bottled at Grangehurst using a gentle gravity flow filling system, the wine flowed from the elevated bottling tanks through a cartridge filter to the hand filler and into the bottles. This was the only stage during the entire winemaking process that the wine was filtered. 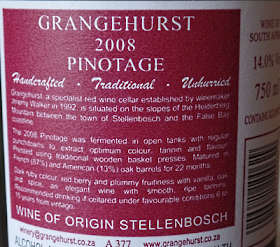 I found cedarwood on the nose and the wine had an attractive bright cherry red colour, swirling in a glass left persistent ‘legs’

There was a melange of berry fruits on the palate,  a hint of mint, and soft tannins on a long finish. This is a smooth sophisticated wine and delicious partner for dinner. 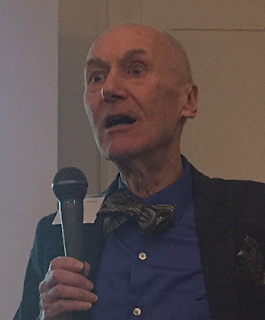 In Toronto to present a Pinotage tasting for the South African Wine Society, run by the indefatigable Eleanor Cosman who sourced all the wines. 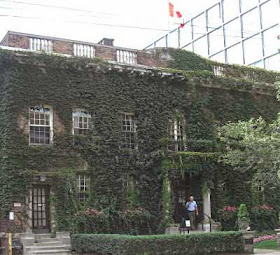 The tasting was held, like my previous International Pinotage Tasting in 2014, in the Toronto University Faculty Club, a 1920’s ivy-covered mansion. This time all the wines were South African, apart from the starter Pinotage  from Oregon.

I can't take notes while presenting a tasting, so I am indebted to SAWS stalwart Jon Whitteker whose notes in bold follow the tasting sheets comments.

Southern Right Pinotage 2015    Hemel-en-Aarde Valley    - $26.95
One of the most honest, authentic Pinotages of South Africa, showing fruit and florality with fresh blueberry/chokecherry, peony, wood smoke, spice and yes a touch of tar. It is medium weight, fairly firm and dense with pleasant tartness, fine tannin and some minerality on the finish.  (open bouquet with dark fruit / palate has very good fruit, balance, medium length and good acidity )

Warwick Three Cape Ladies Cape Blend 2011    Stellenbosch    - $23.60
Each component of this Cape blend offers it’s own qualities. This vintage shows an explosion of fruit on the nose which is largely attributable to the Cabernet sauvignon and Pinotage components. The Shiraz is soft and sweet. The Cabernet Sauvignon is the backbone of the blend. Spicy stewed fruit and spicy ripe tannins with an innate softness and long lingering aftertaste. This blend brings the best of Pinotage to the classic French varieties and will age well.  (medium nose with good fruit / palate has very good dark fruit, medium full with good length and depth)
(40% Pinotage / 30% each Cab Sauv & Shiraz)

Two servings of food were made during the tasting and it was a mosr enjoyable evening, especially in meeting Eleanor, Jon and other members who'd been to my previous tastings in Toronto.

On a show of hands, the favourite wine of the evening was, narrowly, Southern Right. 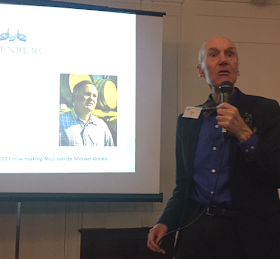 Photos of Peter May courtesy of Eleanor Cosman
Thanks again to Jon Whitteker for his tasting notes and support.
Thanks to Eleanor Cosman for the excuse to visit Toronto again, a great tasting and lunch the next day.
Peter F May at 22:02 No comments:

She 'began with a lovely light Pinotage rosé full of ripe red fruity aromas brought out by the 4% Muscadel. The cupcake, with grenadine-flavoured cream cheese icing, picks up on the pomegranate notes. It’s worth remarking Delheim has been making this rosé for 41 years'. 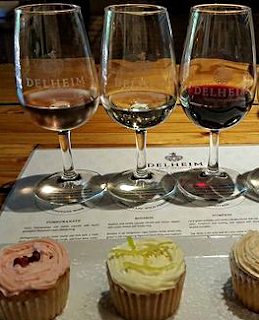 and for an earlier take on the pairing see here 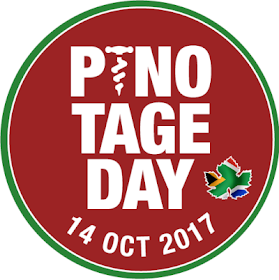 Today is International Pinotage Day. What Pinotage will you be opening?

The South African Post Office has produced a set of five small international letter rate stamps and a commemorative envelope as tribute to the South African wine industry.

The stamps were by designed by Rachel-Mari Ackermann of the SA Post Office.

The stamps cost R45.75 for a set of five and a commemorative envelope costs R48.75.  The stamps are available from all major South African post offices and can be ordered from sa.stamps@postoffice.co.za.

The set of the stamps are shown at
https://www.postoffice.co.za/Philately/2017/wine1.html

Spatz produced the first Rosé Pinotage in 1976, he played a major role in several wineland initaitive, including the Stellenbosch Wine Route in 1971, the country's first wine route and was instrumental in developingthe Wine of Origin system.

The news of Spatz's passing was announced by Delheim as follows:


The South African wine industry has lost a pioneering icon in the passing of the legendary Spatz Sperling, patriarch of Delheim Estate and co-founder of the Stellenbosch Wine Routes, who died of natural causes at the age of 86 on 08 October. Delheim will close today at 15:00 as we celebrate his life and cherish all the good memories with loved ones. We will not be answering emails or phone calls for the rest of today.

No ordinary octogenarian, Michael Hanz 'Spatz' Sperling, a German-born vintner who arrived in the country in April 1951 as a 20 year old World War II refugee, has built Delheim into one of the most enduringly popular and successful wine destinations in the Cape over the past half century. Over the years this family-run wine farm also became a microcosm of Spatz's visionary work in the greater Stellenbosch community and the Cape Winelands as a whole.


Spatz, who coped admirably with Parkinson's disease the last few years, was not only a craftsman of superior wines, but introduced numerous 'firsts' and left an indelible legacy in the Cape Winelands.

Today we toast his pioneering spirit as we pay homage to the great visionary, husband, father and grandpa he was. It is with very heavy hearts that we have to say goodbye, but we are thankful that he is no longer in pain and at peace. 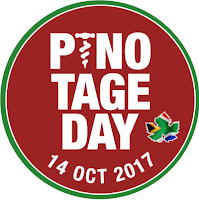 It's just a week to International Pinotage Day on  Saturday14 October.

If you are in South Africa there are many Pinotage Day events in the winelands and the Leriba Hotel, Centurian between Pretoria and Johannesburg  are holding a Pinotage Week with  alunch and tastings tomorrow, Sunday 8th  and events every day from the 10 October culminating in a Pinotage and Biltong Festival on the weekend of 14-15 October.

I'm not aware of any events elsewhere, though Paul Kemp at Loma Prieta winery in California, which is North America's largest Pinotage producer, tells me he is making plans.

I'll be joining in by opening a bottle of good Pinotage!

The South African Wine Society of Toronto, Canada, is holding a Pinotage tasting on Tuesday 24 October 2017.

I'll be there pouring South African Pinotages plus one from Oregon.

It doesn't seem that three years have passed since I last presented a SAWS tasting in Toronto.

Hope to see you there!

Winners of the seventh Absa Perold Cape Blend Competition were announced on 4 October 2017. The five equal winners are: 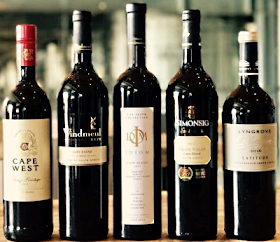 The definition of a Cape Blend is a minimum of 30% and maximum of 70% Pinotage.

Pinotage Association chair Beyers Truter said “It’s encouraging to see how winemakers have embraced this challenge by creating unique wines that involve a vast array of styles and techniques.”

De Wet Viljoen, vice-chair of the Association, remarked that the leading examples are testimony to the quality of top South African combos that can represent the country among the best wines anywhere in the world.

Jacques Roux, convener of the judging panel, concurred, reflecting on diversity of styles and praising the astonishing quality of the 53 entries this year. Cape Blends, he said, are a reflection of the winemaker’s vision, adding that it is delightful to see how they combine different variables to make for world-class combinations.

Absa’s Provincial Managing Executive in the Western Cape, John Tshabalala, commented that Pinotage and Cape Blends are truly unique jewels in the South African winelands. On the subject of Absa’s support, he said that: “This partnership reflects our long-standing commitment not only to the Pinotage Association but to the South African wine industry as a whole.

2017 is a good year for Windmeul who also won a trophy at this years Absa Top 10 Pinotage Awards. 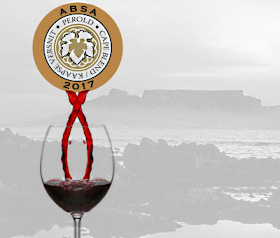 The three wines, equal winners of the Award of Excellence, announced on 4 October 2017, are 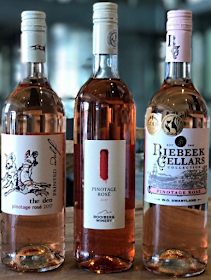 “This is a very exciting addition to the competitions focusing on the different expressions of Pinotage,” said De Wet Viljoen, vice-chair of the Pinotage Association. “The winning rosé wines are refreshing and of great quality, reiterating the vision to incorporate and support various styles and market stakeholders.”

Pinotage was in demand at the Nedbank Cape Winemakers Guild annual auction with Beyerskloof 'Traildust' Pinotage 2015, made by Beyers Truter, reaching the highest average price at R1449 (80 GBP/106 USD) a bottle. Beyers said the wine is a selection of the best barrel aged 21 mnths in new French oak.


With the third highest average price of R1309 was Kaapzicht Estate 'The Ultimate Vision' 2015, a Cape Blend of  45% Pinotage; 45% Cabernet Sauvignon; 10% Merlot. This was made by Danie Steytler, his final CWG wine as he retires from winemaking at the end of 2017.

Kanonkop CWG Pinotage 2015, made by Abrie Beeslaar was in eighth highest place at R1222 per bottle.

14% VAT  is payable on the prices above.